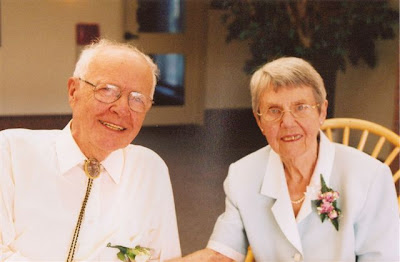 RATCLIFF, Doris Clarice (nee Baker), November 18, 1917 ~ June 17, 2009 – The family announces with both sadness and joy her death at 91 years of age, in the comfort of Fairvern Nursing Home, Huntsville, ON. Sadly missed because she was such a loving and caring wife and mother; joy because she has left this world for a far better place and we know we will see her again some day. She is survived by her beloved husband of almost 69 years, Floyd, formerly of the family farm west of Stouffville, and three children, MaryLou (David) Hisey, of Huntsville, ON, Malcolm (Doris M.) of Timmins, ON, and Janice (John) Cross of Olds, AB. Doris is survived by sister-in-law, Helen Baker of Stouffville, ON; Shirley Baker of Chester, CT; brother- in-law, Howard (Helen) Ratcliff of Stouffville, ON; sister-in-law Pauline Ratcliff of Stouffville, ON; and sister-in-law Maureen Ratcliff of Huntsville,ON. Doris is predeceased by two brothers, Merlyn and Alan Baker, and sisters, Alma (and husband, Jim) Oldham and Mary (and husband, Keith) Hutchinson. Grandma is fondly remembered by seven grandchildren, Scott, Meredith, Brad, Stephanie, Julie, Andrew and Naomi as a kind and gentle grand- mother. She had six great-grand- children, Jasmine, Cody, Robyn, Ellie, Adelaine and Ethan. A private committal service will be held at graveside of Springvale Baptist Church cemetery on Monday, June 22 followed by a memorial service commencing at 3 PM in the church auditorium. Remembrance donations may be made to a mission of one’s choice through the church office. Springvale Baptist Church is located 4 miles west of Stouffville on the family farm.

Ratcliff, Floyd Grenville: April 11, 1917 – July 11, 2009 – The family wishes to announce his peaceful departure in the comfort of Fairvern Nursing Home, Huntsville, ON at the age of 92 to join his wife, Doris (nee Baker) who passed away on June 17, 2009. They were faithful, loving companions for almost 69 years. Dad was such a kind and caring father who will be sadly missed but we are comforted by the thought that he is in a far better place. Formerly of the family farm west of Stouffville, he is survived by three children, MaryLou (David) Hisey, of Huntsville, ON, Malcolm (Doris M.) of Timmins, ON, and Janice (John) Cross of Olds, AB. Floyd is also survived by one brother, Howard (Helen) Ratcliff of Stouffville and sisters-in-law, Pauline Ratcliff of Stouffville, and Maureen Ratcliff of Huntsville. He is predeceased by two brothers, Donald and Charles. Grandpa is fondly remembered by seven grandchildren, Scott (Janice), Meredith (Dave), Brad, Stephanie, Julie, Andrew and Naomi (Troy) and six great-grandchildren, Jasmine, Cody, Robin, Ellie, Adelaine and Ethan. A committal service will be held at graveside at Springvale Baptist Church cemetery on Friday, July 17 at 2:30 PM followed by a memorial service commencing at 3 PM in the church auditorium. Remembrance donations may be made to a mission of one’s choice through the church office. Springvale Baptist Church is located 4 miles west of Stouffville.

Many of my memories of Grandpa revolve around a small but well equipped shop in his garage. Grandpa was an excellent carpenter and as a young boy of around 12, visiting for the summer, I was his eager apprentice. I think one of our most memorable projects was a live squirrel trap. Grandpa came up with a magnetic trigger that made it work really well. We eventually managed to trap a squirrel but our first catch was two black starlings. I was so excited I carried the whole box inside the house to show Grandma. In the process I released two unhappy starlings in the house. I will never forget Grandma chasing those two birds around the house with a broom! Grandpa’s willingness to let me dull every blade and drill bit in his shop gave me an opportunity to discover something I loved and set me on a course for a future career. But more than that, Grandpa was an example of a man I want to follow.

Those who know Grandma, know that she kept a very clean and tidy house where everything had its place. Grandma was a gracious host and very hospitable. For Sunday dinner, Grandma would often put a roast in the oven, set the table with her fine china and invite guests over. Although she added very little spice to her meals, Grandma placed a mean horse radish on the table that instilled a new found respect in her grandson. Her meals were great.

Both Grandma and Grandpa lived during times of tremendous change. They watched the land surrounding their small dairy farm transformed from quiet countryside to suburbia. Once quiet country lanes were paved and then doubled. Their church went from being a small sanctuary that held 125 to one that seated 450 and then over 2000. The culture that they knew and loved changed, morals changed and so did technology. I remember Grandma speaking of some of the changes she saw and how it was sometimes a struggle to respond in the right way. That short conversation has always stuck with me. Grandma was a very astute and thoughtful women whose living faith in Christ constantly shaped her thinking.

Grandma and Grandpa have left us, their grandchildren, with a rich heritage, and I count it a great blessing to have had them as my Grandparents. They will be deeply missed.

Grandma and Grandpa, strangers in this world, from a dairy farm outside Stouffville, Ontario, but at home now, chosen according to the foreknowledge of God the Father, through the sanctifying work of the Spirit, for obedience to Jesus Christ and sprinkling by his blood: Grace and peace are theirs in abundance.

Praise be to the God and Father of our Lord Jesus Christ! It is because of his great mercy that we are assured that Grandma and Grandpa passed through death into life because of Jesus ressurection from the dead, and have received an inheritance that can never perish, spoil or fade that was kept in heaven for them. Through faith they were protected by God’s power unto salvation. In this they rejoiced, for though for a little while they suffered grief in all kinds of trials, these have proven their faith genuine, a faith which is more precious even than gold which is not eternal though it is purified by fire, and has resulted in praise, glory and honor to our Lord Jesus Christ.

For him who they loved they now see and him who they believed in they see and are filled with an inexpressible and glorious joy, for they have received the goal of their faith, the salvation of their souls.

Harvard University has taken a step towards shrugging off its image as a fusty straight-laced academic institution by endowing America’s first named professorship of sexuality.

The chair in lesbian, gay, bisexual and transgender studies introduces a discipline still in its infancy into the heart of the country’s academic establishment. Its supporters claim that the move by one of the world’s most august universities will send a message to other institutions globally that “queer studies”, as some call it, has finally arrived….

I came across this the other day. It was written by George Pellew, the class poet at Harvard, 1880.

We ask but time to drift,
We deem it narrow-minded to excel.
We call the man fanatic who applies
His life to one grand purpose till he dies.
Enthusiasm sees one side, one fact;
We try to see all sides, but do not act.
…We long to sit with newspapers unfurled,
Indifferent spectators of the world.