“Come, let us return to the LORD; for he has torn us, that he may heal us; he has struck us down, and he will bind us up. After two days he will revive us; on the third day he will raise us up, that we may live before him. Let us know; let us press on to know the LORD; his going out is sure as the dawn; he will come to us as the showers, as the spring rains that water the earth.”

From War and Peace by Leo Tolstoy:

At the edge of the road stood an oak. Probably ten times the age of the birches that formed the forest, it was ten times as thick and twice as tall as they. It was an enormous tree, its girth twice as great as a man could embrace, and evidently long ago some of its branches had been broken off and its bark scarred. With its huge ungainly limbs sprawling unsymmetrically, and its gnarled hands and fingers, it stood an aged, stern, and scornful monster among the smiling birch trees. Only the dead-looking evergreen firs dotted about in the forest, and this oak, refused to yield to the charm of spring or notice either the spring or the sunshine.

“Spring, love, happiness!” this oak seemed to say. “Are you not weary of that stupid, meaningless, constantly repeated fraud? Always the same and always a fraud? There is no spring, no sun, no happiness! Look at those cramped dead firs, ever the same, and at me too, sticking out my broken and barked fingers just where they have grown, whether from my back or my sides: as they have grown so I stand, and I do not believe in your hopes and your lies.”

As he passed through the forest Prince Andrey turned several times to look at that oak, as if expecting something from it. Under the oak, too, were flowers and grass, but it stood among them scowling, rigid, misshapen, and grim as ever.

“Yes, the oak is right, a thousand times right,” thought Prince Andrey. “Let others – the young – yield afresh to that fraud, but we know life, our life is finished!”

A whole sequence of new thoughts, hopeless but mournfully pleasant, rose in his soul in connection with that tree. During this journey he, as it were, considered his life afresh and arrived at his old conclusion, restful in its hopelessness: that it was not for him to begin anything anew – but that he must live out his life, content to do no harm, and not disturbing himself or desiring anything.

“The old oak, utterly transformed, draped in a tent of sappy dark green, basked faintly, undulating in the rays of the evening sun. Of the knotted fingers, the gnarled excrecenses, the aged grief and mistrust- nothing was to be seen. Through the rough, century-old bark, where there were no twigs, leaves had burst out so sappy, so young, that is was hard to believe that the aged creature had borne them. “Yes, that is the same tree,” thought Prince Andrey, and all at once there came upon him an irrational, spring feeling of joy and renewal. All the best moments of his life rose to his memory at once. Austerlitz, with that lofty sky, and the dead, reproachful face of his wife, and Pierre on the ferry, and the girl, thrilled by the beauty of the night, and that night and that moon- it all rushed at once into his mind.” 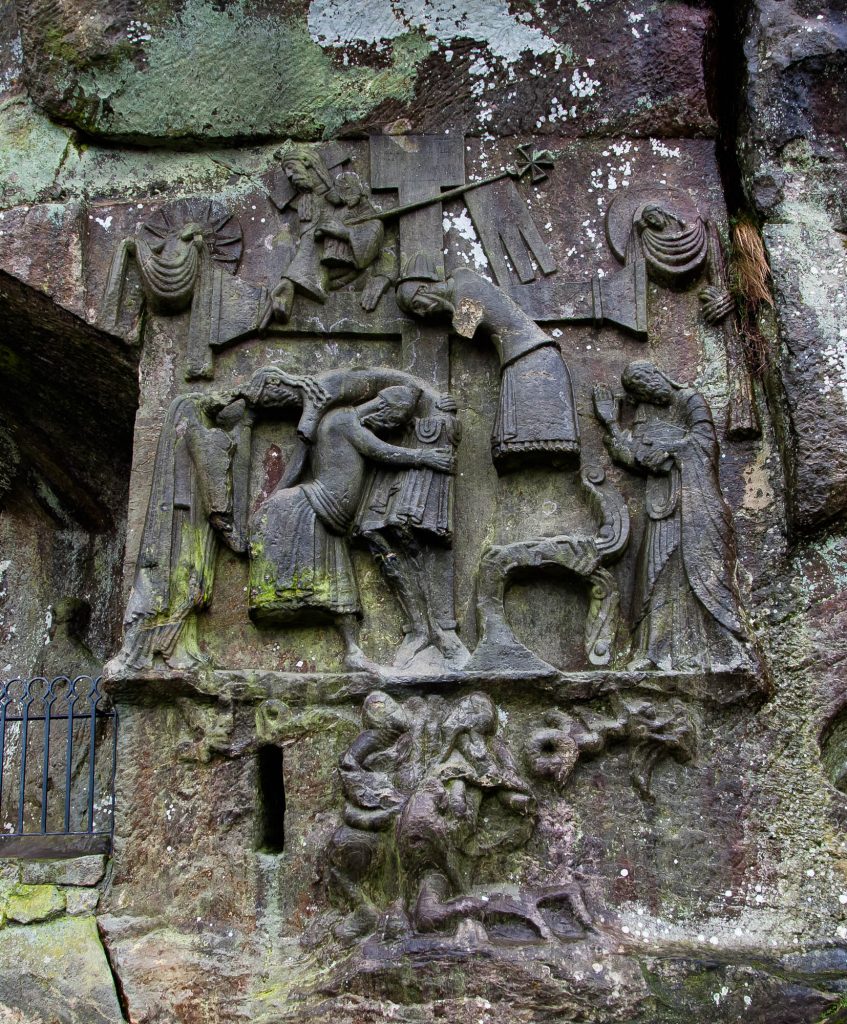 Just before his crucifixion, Jesus prayed, “Father, the hour has come; glorify your Son, that the Son may glorify you.”  It is not easy to understand how the crucifixion could be anything other than a painful way to die but this is not the only place where Jesus connected his death with his glorification.  In the third chapter of John, Jesus spoke of his crucifixion in terms of being ‘lifted up’ (ὑψωθῆναι).  Nicodemus could not have missed the play on words, and perhaps he read a deeper meaning into them, for Jesus seems to be alluding not only to the OT story of the brazen serpent but also to  the words of Isaiah: “Behold, my servant shall act wisely; he shall be high and lifted up (ὑψωθήσεται), and shall be glorified (δοξασθήσεται).” (Isa. 52:13)  Isaiah speaks of the glorification of the Servant, but then Isaiah does something that has puzzled generations of readers.  He begins to speak about the suffering of the Servant as though that were his glorification.

The apostle Paul may refer back to this passage in Isaiah when he writes in his letter to the Philippians about how Christ took upon himself the appearance of a servant, becoming obedient unto the point of death.  Therefore, Paul declares, “God exalted him (ὑπερύψωσεν) and gave him the Name that is above every name…”  This name can be none other than the name Yahweh as every Jewish person knew… and a good many Gentiles too.  But no! Paul says the name is Jesus.  And of course, that is Paul’s point.  Jesus is Yahweh.  Paul continues, “…so that at the name of Jesus every knee should bow, in heaven and on earth and under the earth, and every tongue confess that Jesus Christ is Lord (ὅτι κύριος Ἰησοῦς Χριστὸς) to the glory of God the Father.” (Phil. 2:9-11)

We find a similar expression in 1 Corinthians and there also Paul identifies Christ Jesus with the name for God in the OT: Yahweh.

This is essentially the New Testament rendition of the Shema.  It is an important statement about the identity of Christ for it places the Lord Jesus Christ in direct relation to God the Father.  The essential unity of this profession is strengthened by the fact that the two names, Elohim (theos) and Yahweh (kurios) are the primary names for God in the Old Testament.

And here is a final challenge from Isaiah 53 that I had not seen before.

I think the NET makes a good translation of this verse (cf. “we esteemed him not”, “we did not desire him”, “we considered him stricken, afflicted…”, etc.).  And so that is Isaiah’s challenge for me this Easter, to care.