Walking through the Louvre the other day, I was struck by how different the Greek and Roman sculpture exhibits are from those of the medieval period.  In the latter, chastity and motherhood are celebrated instead of the purely sensual.

The symbols and representational artwork of natural religion have remained constant through the ages.  They may be expressed spectacularly in Greek sculpture or Renaissance art, or they may be depicted crudely on primitive tribal masks or on MTV, but they draw from the same well.

M. Legaspi argues that we cannot understand the change in attitude towards the Old Testament in German universities in the 18th and 19th centuries without also considering the way in which classics departments in these same universities embraced ancient Greek literature.   Legaspi writes,

German philhellenism was not simply a movement: it was a “faith”.  To its proponents, it entailed the monumental task of replacing Christianity with a new form of life derived from an imaginative engagement with Greek antiquity. To say this is to indicate the kind of personal, intellectual, and creative investment that characterized philhellenists and inspired them to create journals, pioneer new forms of literature, undertake Mediterranean pilgrimages, adopt looser sexual mores, and abandon respectable careers.   One of the pioneers in this field of study was J.J. Winckelmann (1717-1768), of whom Goethe hails as “the first great pagan of his time.” (Legaspi 2010, 56)

Winkelmann sought to throw off the shackles of Christianity, which he believed suppressed the human individual, and replace it with the beautiful, free, noble view of humanity he found in classical antiquity.  Goethe continued Winckelmann’s project, “immersing himself in Greek literature and art and began the constructive enterprise of creating a pagan alternative to bourgeois Christian culture. This was the new gospel preached in Germany. Schiller argued that the best hope for humanity lay in “a new, hellenically inspired program of aesthetic ennoblement, the creation of a kind of “asesthetic state” to transcend the existing political and religious order.” (ibid.)

Almost contemporary with Winkelmann was another pioneer figure in the German university, J. D. Michaelis, who taught Old Testament at Gottingen.  Michaelis approached the Old Testament from a purely literary perspective.   The students taught by Michaelis and Winkelmann would dominate Biblical studies for the next century.

M. Legaspi, The Death of Scripture and the Rise of Biblical Studies, Oxford University Press (2010)

There are a group of rocks near Detmold that a friend showed me one wet and miserable day. (thank you Jon!) 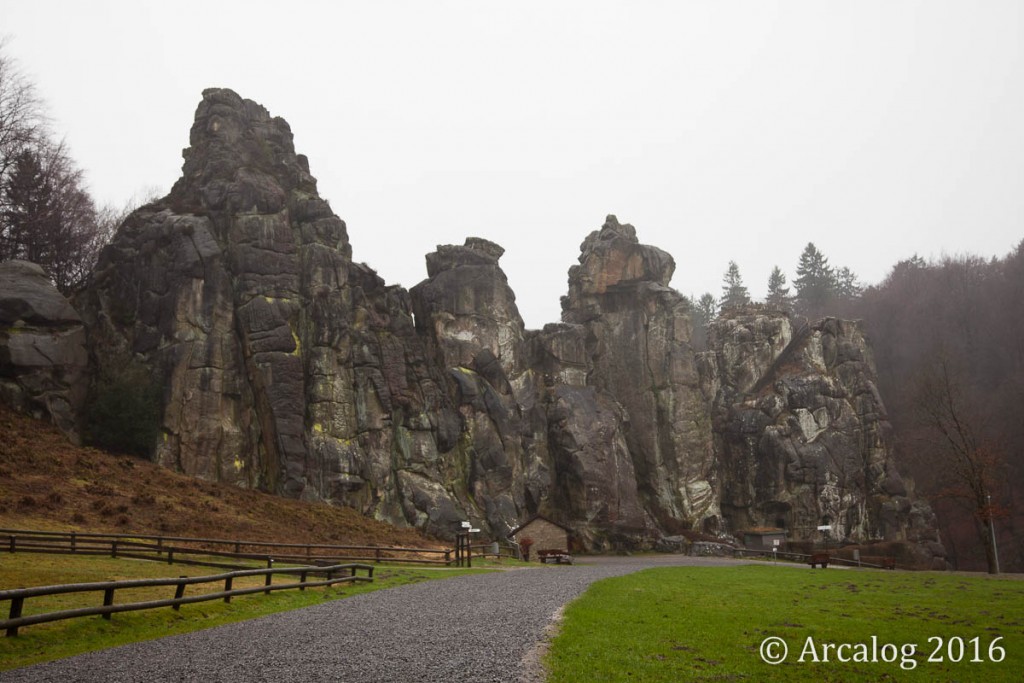 There is some evidence that it was an ancient cultic site.  There is apparently a hole cut in the rock at the top of one of the pillars that aligns with the sun during the solstice.  The sun may have shone through this hole into a darkened chamber of some kind. One can see something similar to this at Casesarea Maritima where a hole was cut in the ceiling of an underground vaulted chamber so that the sun shone into the chamber and lit up a small altar during the summer solstice.   The chamber was used by devotees of Mithras, an eastern cult that was very popular in the Roman world in the 2nd and 3rd centuries AD.

There are also tombs in the area although I am not sure how old they are. 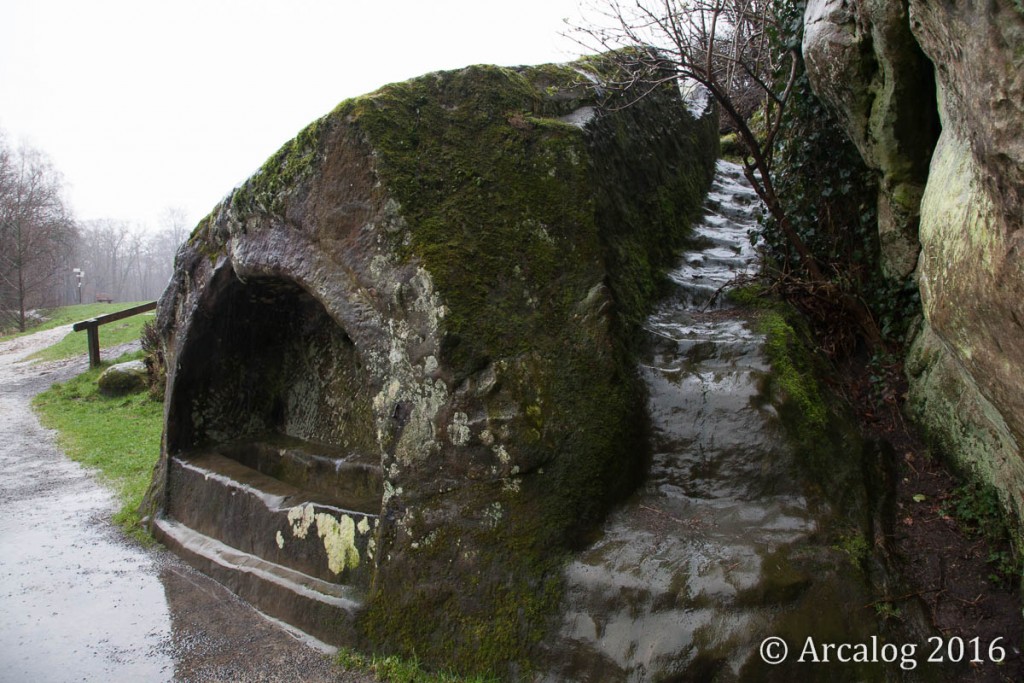 It looks like the top of the tomb chamber was used as a podium of some kind. 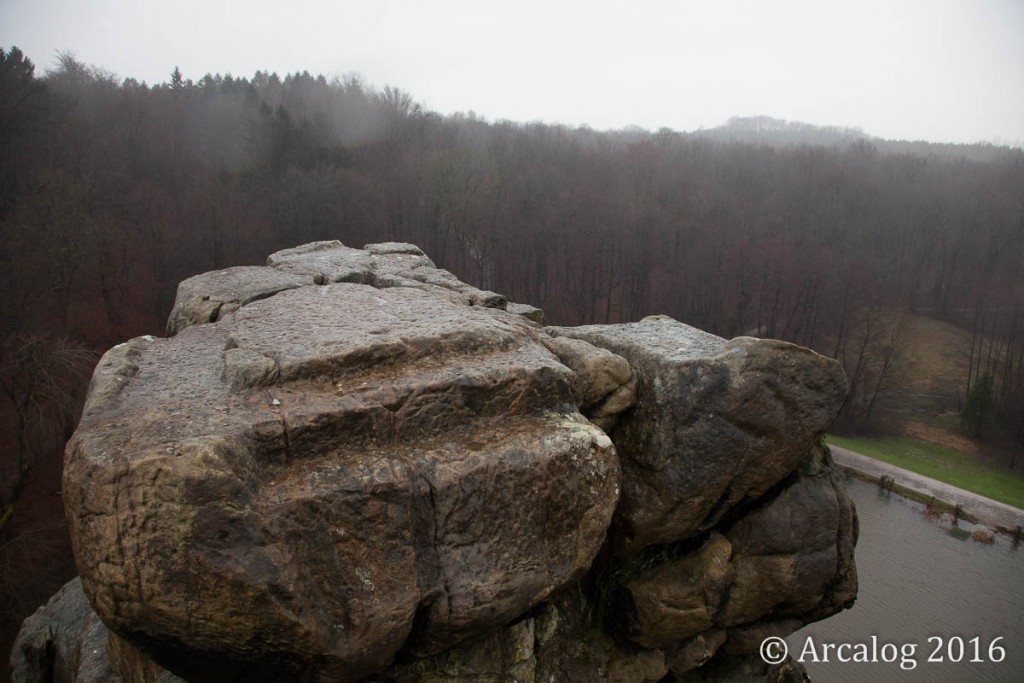 The most interesting thing about these pillars is the relief carved into the rock face that to dates the middle ages.

The iconography follows a common theme in the religious art of the period. The middle panel shows Christ being taken down from the cross by his disciples.  Their heads are bowed in mourning The upper panel shows Christ triumphant, holding a banner. The lower panel shows death and the ancient serpent, Leviathan, defeated at the cross. 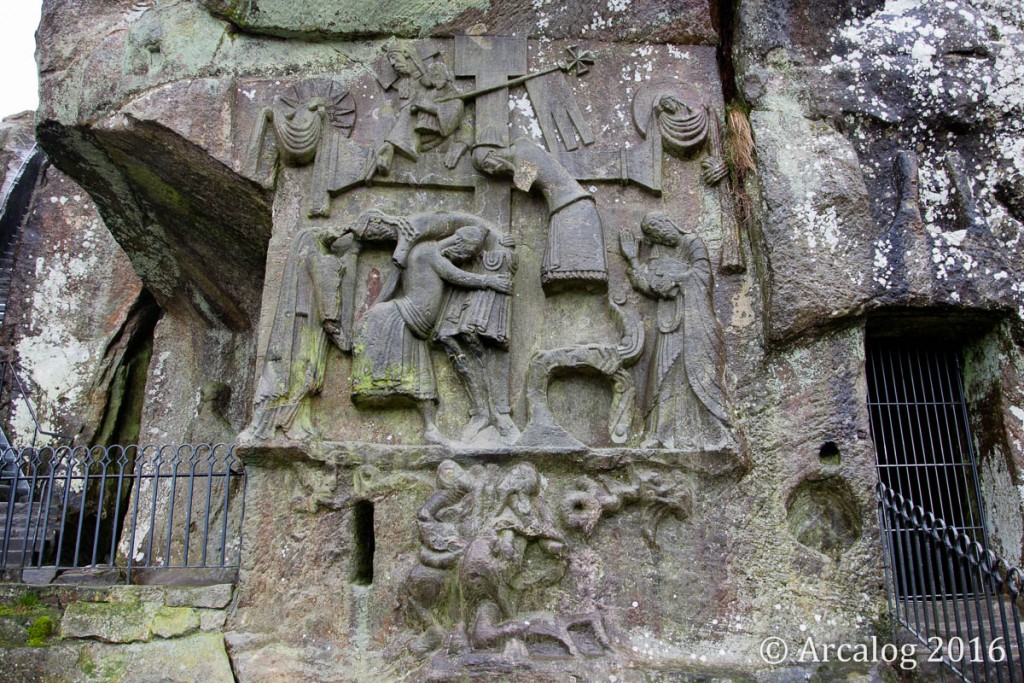 One of Jesus’ disciples is standing on a tree that is bent over under the weight.

The museum description says that the followers of Christ are standing on a chair and that nothing more is intended by the symbolism here.  But this is quite clearly not the case.  it is a tree and not a chair!  Here are the reasons I think so:

It has been suggested that this is an ancient depiction of the Irminsul, a Saxon cultic pillar.  The  relief places the cross next to the Irminsul to make a statement.

This site has an interesting history in the modern era as well.  The Nazis turned Externsteine into a national monument and used the meager archaeological evidence to invent a history of the place.  It is interesting that the Nazi’s were so keen to promote pagan historical sites in Germany.