There is a cuneiform text from Bronze Age Ugarit that makes reference to a god named Rapiu whose temple was in Athtarat and Edrei.

yea, may he drink, the powerful and noble [god],

the god enthroned in Athtarat,

the god who rules in Edrei

whom men hymn (d yshr) and honour with music

on the lyre and the flute (tlb),

on drum (tf) and cymbals,

with castanets of ivory,

among the goodly companions of Kothar.

And may Anat the power<ful> drink,

the mistress of kingship,

the mistress of dominion,

the mistress of the high heavens,

The text refers to Athtarat and Edrei as twin cities.  They also appear together in the Bible.

“Og King of Bashan, of the remnant of the Rephaim, who dwelt in Ashtaroth and in Edrei” (Josh 12:4)

These two cities came to an end at the end of the Late Bronze Age which means that the Bible accurately relates information from that time period.  KTU 1.108 links these two cities with a god named Repiu.   The Bible says that the people who lived in these cities were named the Rephaim.  Could it be that the people were called ‘Rephaim’ because they were named after the  the god Repiu whom they worshiped?  There must be some connection.

The Bible says that the Rephaim were called the emim by the Moabites and the zamzumim by the Amonites (Deut 2:10-11,20).   It also says that the Rephaim were considered like the Anakim. (Deut. 2:11)  The Anakim may have been a people of Cretan / Greek origin who lived in the region of Caria on the east coast of Asia Minor before settling in the area around Hebron in the southern hills of Canaan.1   According to Numbers, Hebron was built seven years before Zoan (the Hyksos capital in the Delta region of Egypt) which means Hebron was founded around 1736 BC. 2

They went up into the Negeb and came to Hebron. Ahiman, Sheshai, and Talmai, the descendants of Anak, were there. (Hebron was built seven years before Zoan in Egypt.) (Num. 13:22 ESV)

The Bible says that Arba was the father of the Anakim.  O. Margalith points out that a number of cities on Crete bear names like Arbion and Arbis, and there was a temple to Zeus Arbios built on Mount Arbion. 3  Greek legend tells how the nymph Dione bore a son to Apollo in Crete named Miletus.  This Miletus roamed at the head of a band of Cretan warriors and reached Caria on east coast of Asia Minor.  There he founded the city of Miletus.  The country was called Anactoria, ruled by Asterius son of Anax. 4

If the Rephaim are numbered among the Anakim then it is probable that they too are of foreign origin, or at least their king was, for Og does not look like a Semitic name.  “Og” is reminiscent of the names of kings from Anatolia such as Gyges, the king of Lydia, and Gog, the future king of a northern people mentioned in Ezekiel.  An explanatory note in Deuteronomy adds that Og had an iron bed that was 13′ long which could still be seen on display in the Ammonite city of Rabbah.  (Deut. 3:11) 5  Curiously enough, the Greek author Pausanius relates that Asterius, the father of Anax, was reportedly more the ten cubits long!

Before the city of the Milesians is an island called Lade, and from it certain islets are detached. One of these they call the islet of Asterius, and say that Asterius was buried in it, and that Asterius was the son of Anax, and Anax the son of Earth. Now the corpse is not less than ten cubits. (Pausanius, The Description of Greece)

According to Genesis 14, the Emim, Rephaim, and Zamuzumim were once the names of distinct people groups that inhabited the Trans-Jordan.

In the fourteenth year Chedorlaomer and the kings who were with him came and defeated the Rephaim in Ashteroth-karnaim, the Zuzim in Ham, the Emim in Shaveh-kiriathaim, (Gen. 14:5 ESV)

The Rephaim are also mentioned in a list of people groups that inhabited the land of Canaan recorded in the book of Genesis.

On that day the LORD made a covenant with Abram, saying, “To your offspring I give this land, from the river of Egypt to the great river, the river Euphrates,  the land of the Kenites, the Kenizzites, the Kadmonites,  the Hittites, the Perizzites, the Rephaim,the Amorites, the Canaanites, the Girgashites and the Jebusites.” (Gen. 15:18-21 ESV)

This is the first place where the original inhabitants of the land of Canaan are listed.   The list takes on a formulaic expression in Exodus and Joshua but noticeably missing from these later lists are the Kenizzites, the Kenites, the Kadmonites, and the Rephaim.   6

…the Canaanites, the Hittites, the Hivites, the Perizzites, the Girgashites, the Amorites, and the Jebusites. (Jos. 3:10 ESV)

Why don’t these later lists of the inhabitants of Canaan include the Rephaim while the list in Genesis does?  One explanation is found in Deuteronomy where the Rephaim are called a remnant, suggesting that they had once been a much larger and more powerful group. (Deut. 3:11)  Thus, the list in Genesis probably reflects Canaan in the time of Abraham.  The Rephaim probably flourished in the Middle Bronze Age although almost nothing of their civilization is known.  In this regards, we do well to take the advice of Thucydides who warns his readers from reconstructing history on the basis of archaeology alone.  The people mostly lived in villages back then and so we should not expect to find much left of their civilization. 7   The arrival of the Rephaim and the Anakim in the land of Canaan is perhaps marked by the many shaft tombs discovered at Jericho and elsewhere that contain just a single body buried with weapons and distinctive “bloated” pottery.   By the Late Bronze period, the Rephaim seem to have been confined to a small area of the Trans-Jordan.

As previously mentioned, the Rephaim are missing from the later lists of the inhabitants of the land of Canaan, probably because they were no longer in the land of Canaan proper.  The Kenites and the Kenizzites are also missing from these later lists, but for a different reason.  They seem to have been partially assimilated into Israel.   Moses father-in-law was a Kenite and this group was still distinguishable in Jeremiah’s day as the Rechabites who were commended by the prophet for their faithfulness to the laws of their ancestors.  (1 Chron. 2:55, Jer. 35)   Likewise, the Kenizzites seem to have been assimilated into the people of Israel.  Caleb’s father Jephunneh was a Kenizzite.  And the Kadmonites???   I don’t know but they are an interesting group.

KTU 1.108 provides some interesting information about the worship of the god Repiu.

May Rapiu (rpu), King of Eternity, drink [wi]ne… whom men hymn and honour with music, on the lyre and the flute (tlb), on drum (tf) and cymbals, with castanets of ivory.

Repiu looks a lot like Dionysus, the Greek god of wine and theatre, who was worshiped through frenzied dances and wild music as Aeschylus so vividly describes:

One on the fair-turned pipe fulfills
His song, with the warble of fingered trills
The soul to frenzy awakening.
From another the brazen cymbals ring.
The aulos blares out, but beneath is the moan
Of the bull-voiced mimes, unseen, unknown,
And in deep diapason the shuddering sound
Of drums, like thunder, beneath the ground.

If Repiu is a underworld deity like the underworld spirits called the Rephaim then this provides another point of comparison with Dionysus who is likewise connected with the underworld.  It is curious that the name Og was found on a 6th – 5th century inscription from Byblos where he is perhaps identified as a underworld deity. (HALOT, “Og”)  The Anake were also worshiped as underworld deities in Athens. 8  I don’t know what to make of it.

KTU 1.108 also tells us that Repiu’s consort is Anat a goddess whose attributes share much in common with Ishtar, the Mesopotamian goddess of sex and war.  The full name of the city of Ashtaroth is ‘Ashtaroth Karnaim’ which means “the horned goddess”.   Thus it would seem that Anat = Astarte = Ishtar.   Astarte was worshiped in the Trans-Jordan through the Iron Age.  A statue of a goddess wearing a three horned mitre was found in an Edomite shrine at Horvat Qitmit.  And there are some much older depictions of what may be a three horned goddess from Egypt and from a symbol on a copper saw found in a stash of bronze weapons and tools at Kfar Monash in Israel. 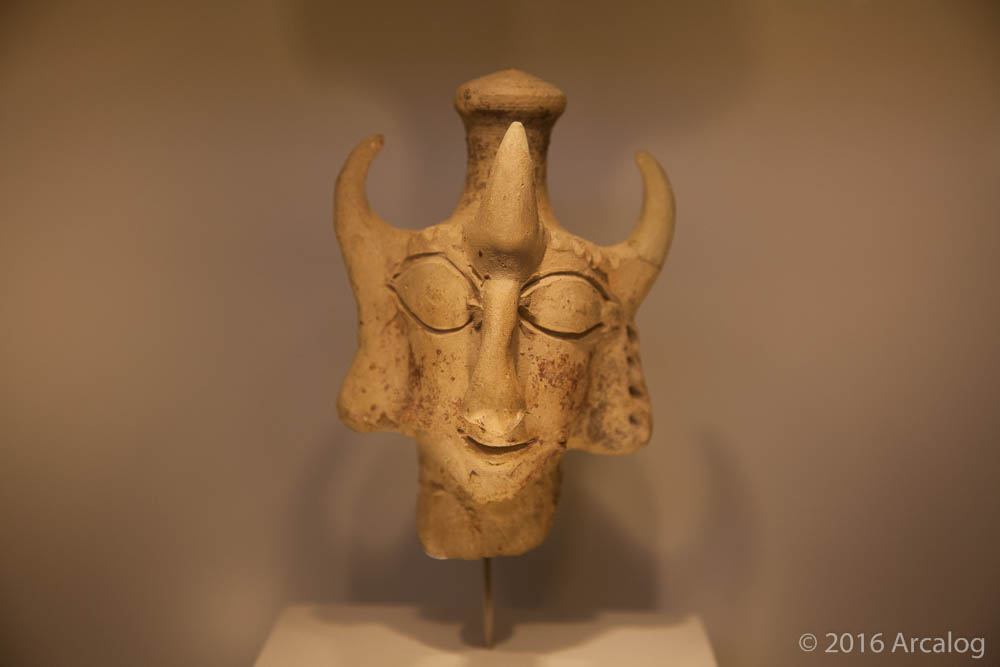 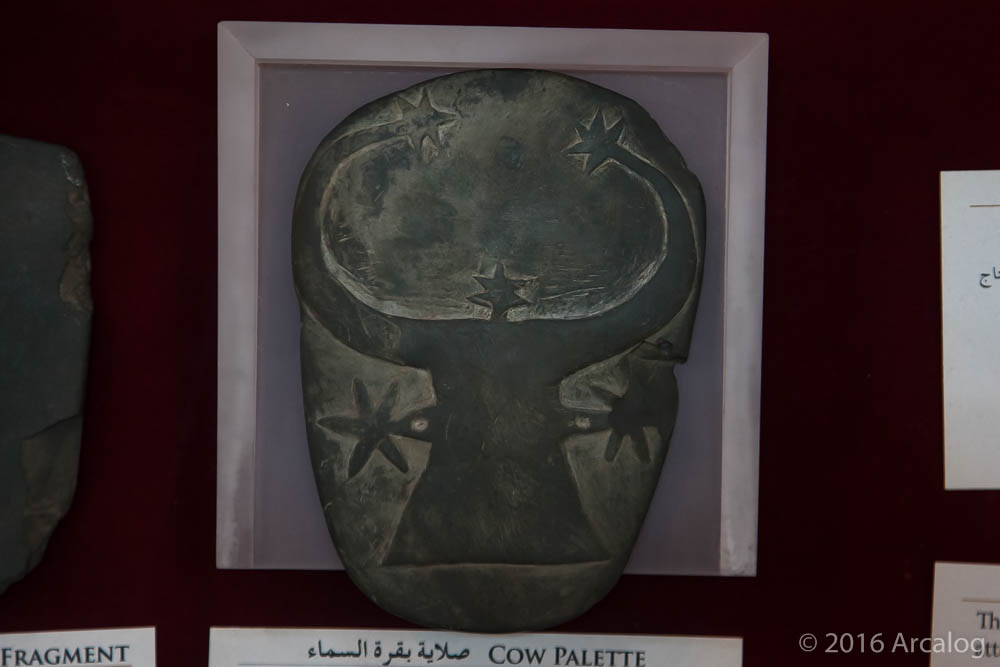 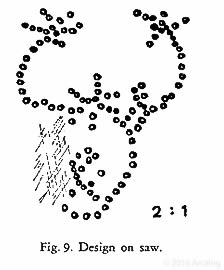 The Kfar Monash horde is one of the more curious displays in the Israel Museum.  It is very early.  Some even make these bronze pieces contemporary with those found in the Cave of the Treasure (another large stash of unusually fine bronzes thought to date to the Chalcolithic period) although Ben Tor makes a good case for a later date.  The casting evinces a high level of excellence.   Furthermore, some of the spear heads are Huge!  The largest is 66 cm long and weighs slightly more than 2 kilograms.   If fitted to a properly balanced shaft it would make for an exceptionally cumbersome weapon.  A short English pike typically weighed 2.5 kg’s… heavy ash pole included!   Hestrin and Tadmor thought the larger spear heads from the Kfar Monash hoard might be used for ceremonial purposes.  9  I think Yadin suggested that they may have been used to dismantle enemy fortifications. 10  Also found among this hoard were copper plates probably used for armor.  They are also unusually large.  (The average size is 11 x 4.5 cm.)11  Typical scale armor from later periods uses bronze plates that are about 1/4 the size.   12   These weapons and tools probably date to the end of the Early Bronze Age. 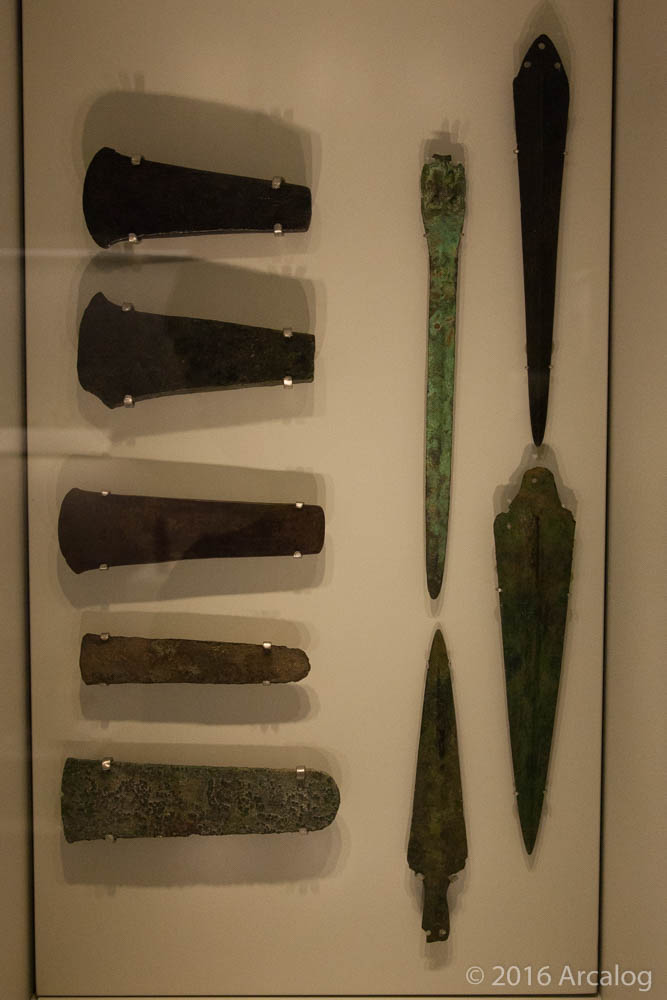 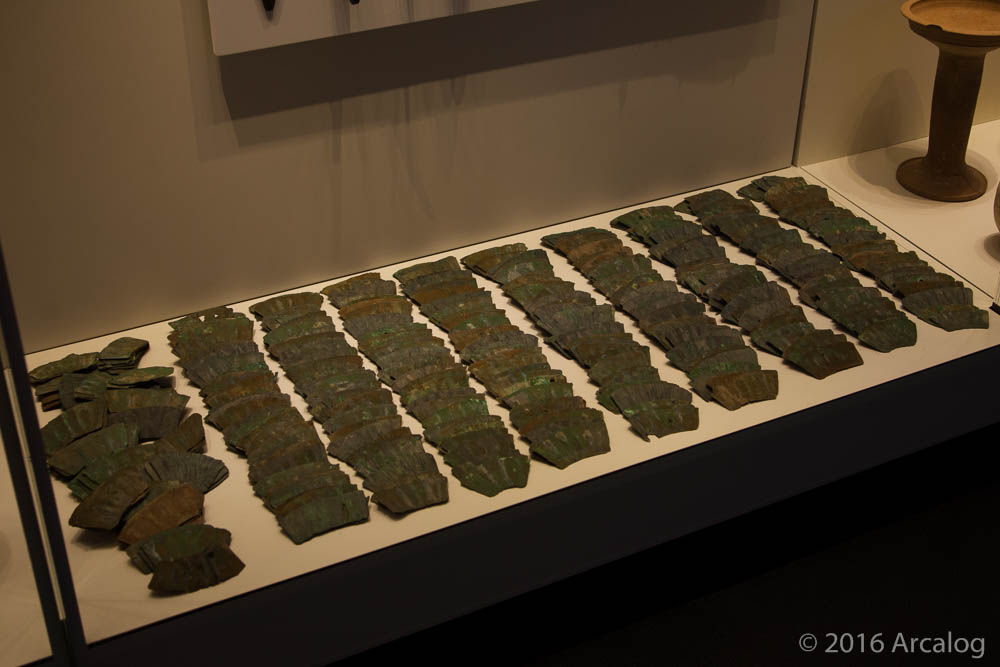 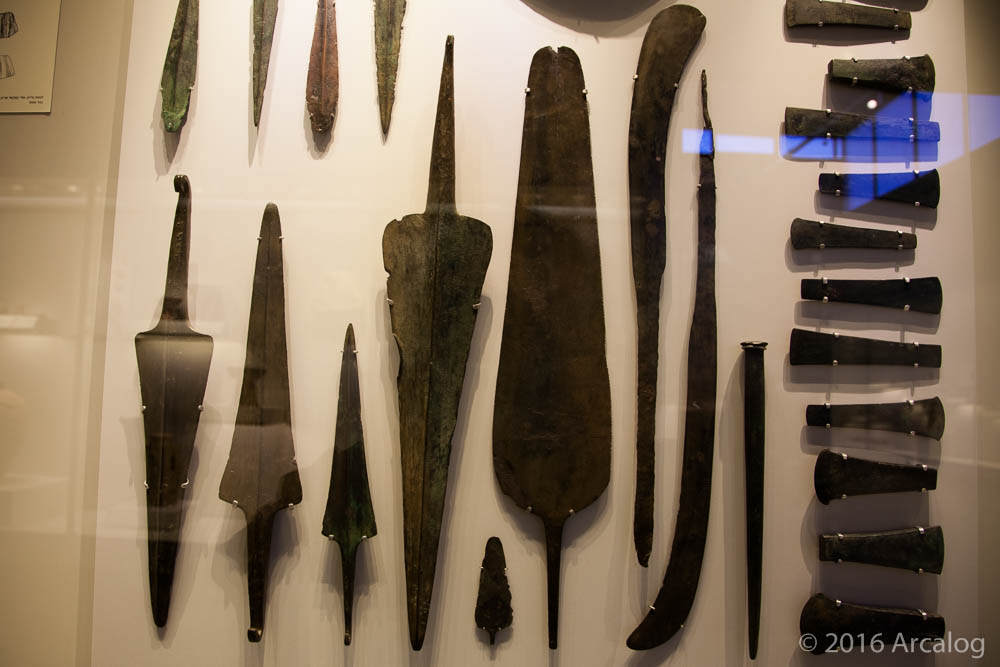