I went to the Gangwashi Church this Sunday AM. I had heard that both President Bush and Condeleeza Rice had visited the church on their visits to China. Gangwashi is part of the ‘Three Self Patriotic Movement’ in China, a state sanctioned Protestant denomination. The state dictates who preaches and what they say. My experience this Sunday reflected that as the church seemed dead.

It wasn’t always that way. In 94′, Yang Yudong, former pastor of Gangwashi, was forcibly pulled from the pulplit and sent to a ‘re-education through labour’ camp because of his stance against the state. He was 73 at that time. Another pastor was appointed in his place. After this, many members left the church to become part of the underground church movement in China. 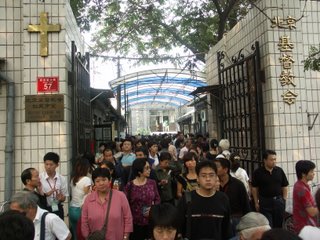