Assurnasirpal II (883–859 BC) was the first expansionist king of the neo-Assyrian empire.  His armies reached as far as Phoenicia, Lake Van and Iran.  Ashurnasirpal II moved the capital of Assyria to Nimrud (Biblical Calah) where some of the best preserved reliefs in the ANE have been discovered.

The stele pictured below was found by Layard at the entrance to the Ninurta temple at Nimrud.  It depicts Ashurnasirpal II standing beneath the symbols of his gods.  The inscription on the stele begins with the words, “I am important, I am magnificent…”

These giant stone bulls with human heads were protective deities that stood in the entrances of temples and palaces.  The one pictured below was found in the entrance to the temple of Ishtar in Nimrud.

Many of the best preserved Assyrian reliefs were discovered by  Layard during excavations of the North West palace of Ashurnasirpal II at Nimrud.  You can find a layout of the Assurnasirpal II’s palace at this link .  The throne room is ‘Room B’ on the plan.   For a more detailed plan view of the throne room click here.  To view all of the different reliefs found in the throne together in one place click here.

Depicted on the wall directly behind the throne was the twin image of the king standing on either side of a stylized tree.  A four winged genie wearing a horned head dress stands directly behind the king on either side.   The genie looks identical to the king except for the addition of wings and a horned headdress.   The meaning of the symbols they carry in their hands are puzzling and I haven’t seen any really good explanations.  Some think that the stylized tree is a date palm tree and that the oval ‘cone’ held in the hand of the genie is a male palm flower used to fertilize the date palm.  The bucket held in his other hand may have contained water that was used to wet the blossoms so that the pollen would stick.  A single date palm is capable of producing 100 lbs of fruit each year; it has a productive lifespan of 100 years; and the fruit are easily dried and preserved, making the date palm a natural symbol of fertility.   The only problem is that date palms were not grown in Assyria.   (Porter, 1993)  Moreover, the bucket held in the genies hand is also depicted in scenes that have nothing to do with the palm tree.    It is at least generally agreed that the scene has to do with the fertility of the land and that the genie standing behind the king in some way protects the king and gives abundance to the land.  It may even be that the genie is the deified king in some sense.

The stylized tree is a motif found throughout the palace of Asurnasirpal II.

Another common motif is the siege and destruction of the city.  This genre reached its apex with the depiction of the siege of Lachish in the palace of Sennacherib.

As the Assyrian army returns victorious to their camp after conquering the city, soldiers dance and play catch with the heads of their enemies to the accompaniment of lyres.  The king is mounted on a chariot together with his attendants carrying the standards of the gods.   The Assyrian camp is depicted schematically as a round disk divided into four quarters.  Servants in each quarter prepare food, bake break, etc.   The kings royal pavilion is located directly in front of the camp.  Gazelles cap the two pillars that mark the entrance to the royal pavilion.

In one quadrant of the camp, a priest looks at the entrails of an animal in order to divine the future.

Clay models of the liver helped to guide the priest in making determinations about the future.  The art of looking at the entrails of animals to divine the future is also known  in Papua New Guinea, where I grew up.  This custom seems counter intuitive and so it is surprising that it would be shared by cultures separated by so much time and distance.

In addition to Nimrud, Assurnasirpal also built the city of Balawat.  The bronze hinges of the gates of the city are well preserved and provide some insight into another aspect of Assyrian society – their inhumanity.

Woe to the city of blood, full of lies, full of plunder, never without victims!  The crack of whips, the clatter of wheels, galloping horses and jolting chariots!  Charging cavalry, flashing swords and glittering spears! Many casualties, piles of dead, bodies without number, people stumbling over the corpses–   all because of the wanton lust of a prostitute, alluring, the mistress of sorceries, who enslaved nations by her prostitution and peoples by her witchcraft.  (Nah 3:1-4 NIV)

Keep in mind the words of Nahum, when you look at the bronze reliefs, 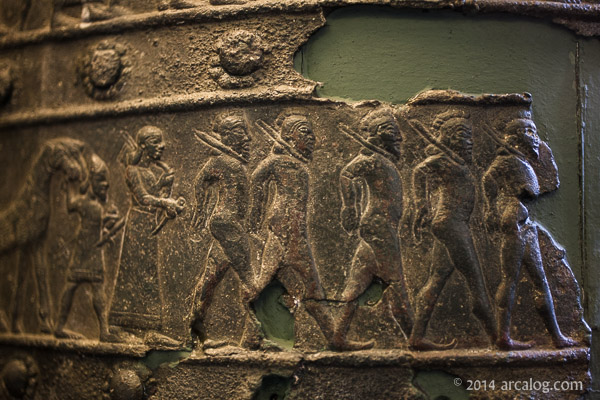 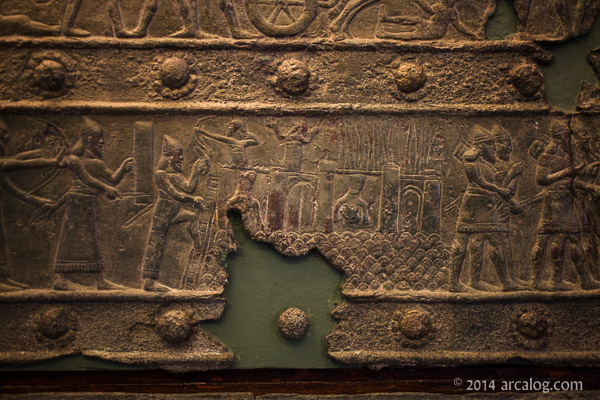 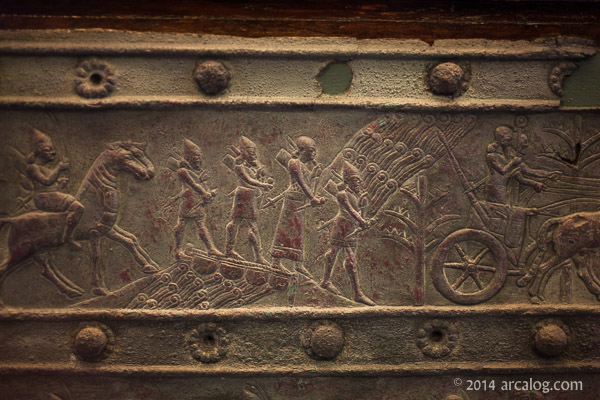 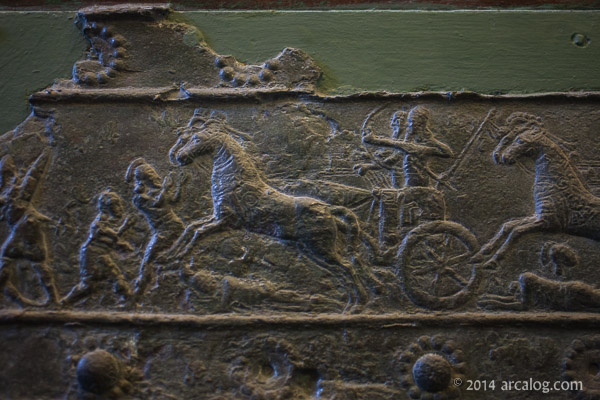 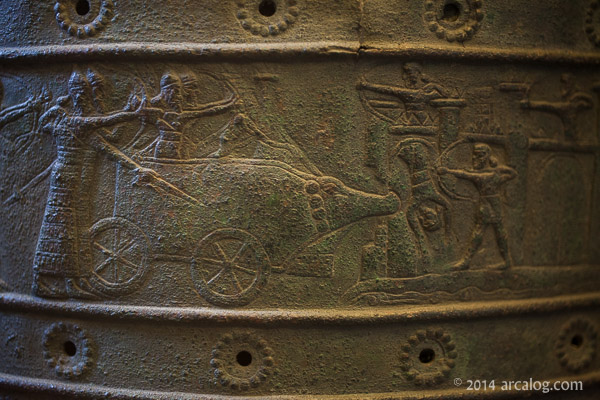 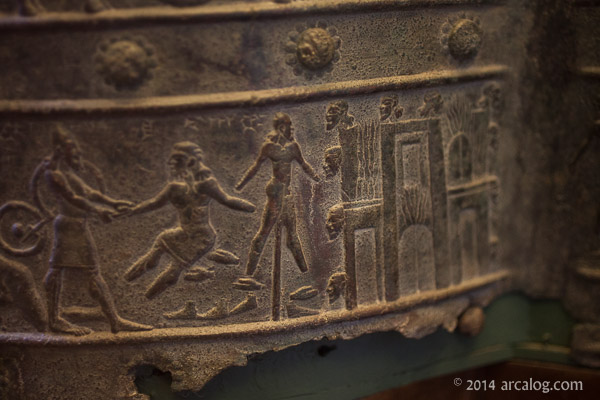 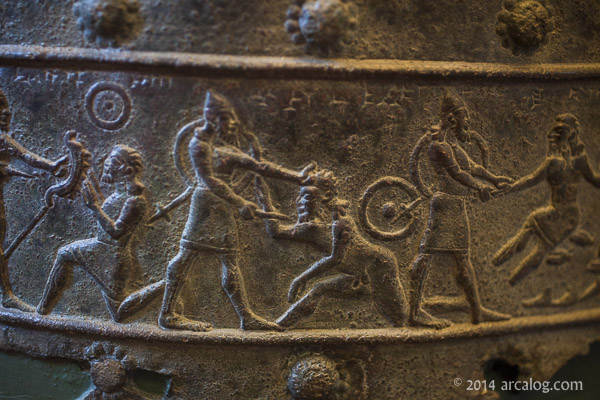 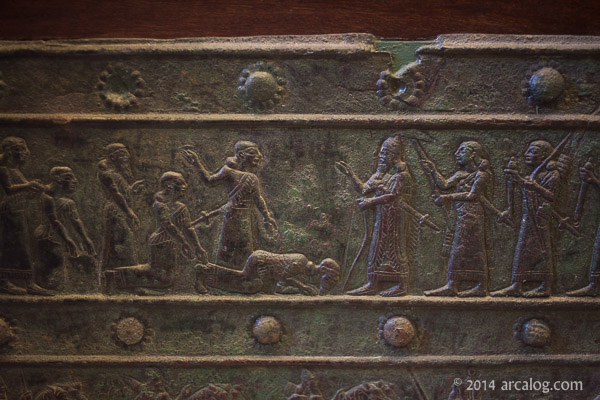 Assyrian culture was militant.  Their cruelty knew no boundaries and there is no evidence that Assyrians considered compassion a virtue.

Luckenbill writes of the Assyrians:

I am aware that it is not good form to sit in judgment upon the kings of old whose deeds we pass in review; that these worthies must be studied in the light of their own time; etc.  To which I reply, that to edit the inscriptions of such a man as Sennacherib is to pass judgment upon him.  If Assurnasirpal, Tiglath-pileser, Sennacherib and the rest insisted on spreading the accounts of their barbarities all over the walls of their palaces, why should we refrain from calling them barbarians?  That the times in which these monarchs lives were strenuous ones none will deny, but if Assyrian justice was ever tempered by mercy, the accounts of it have been lost.  (from the Introduction, The Annals of Sennacherib)

It is no wonder that Dietrich Bonheoffer cast upon Sennacherib, when looking for a historical figure with which to compare Adolf Hitler.  The Assyrians sought to create a unified world culture by force of arms with the belief that Assur had given them the right to rule.  They were the first to use mass deportation as a means of erasing cultural boundaries and made masterful use of propaganda to strike fear into the hearts of their subjects.   In the book of Jonah, the Ninevehites are described as a people ‘who did not know their right hand from their left’?  The very fact that a book like Jonah is found in the OT is an eloquent expressions of grace.  Likewise, Isaiah looked forward to a day when Assyria and Egypt would unite in worship of the one, true God.

In that day there will be a highway from Egypt to Assyria, and Assyria will come into Egypt, and Egypt into Assyria, and the Egyptians will worship with the Assyrians.  (Isa 19:23 ESV)

In that day,  Isaiah says, Israel will be third!   These are not the sort of words  you would expect to come from the mouth of an 8th century prophet whose people were bruised and battered by the Assyrians.

Sennacherib and D. D. Luckenbill (1924). The annals of Sennacherib. Chicago, Ill.,, The University of Chicago Press.